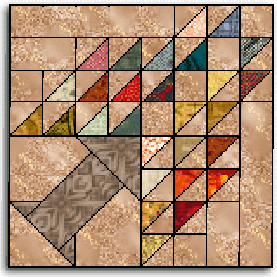 I believe that if life gives you lemons, you should make lemonade... And then try to find somebody whose life has given them vodka, and have a party.

2020 - the year we lost to the Coronavirus Pandemic.  One thing we did have was time. 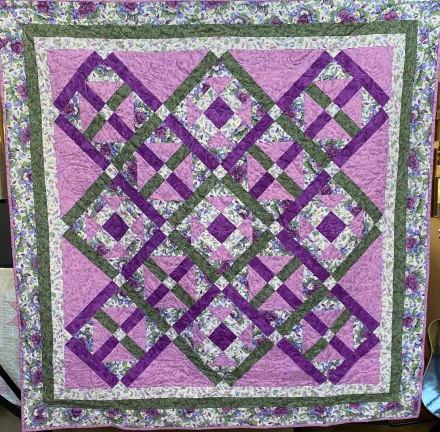 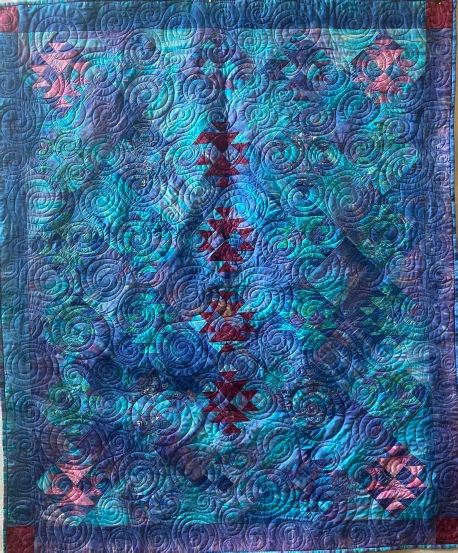 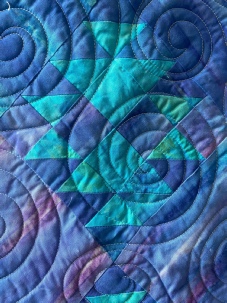 I started this quilt in a Jamboree class in 2003 and finished it only 17 years later.  I was tempted to just get rid of it when it was a UFO, until I found how much was actually finished (lots).  Besides having a directional background, its main problem was low contrast.  All that work and you could barely see the blocks.  I donated it to Community Service - I’m sure somebody will love it.

Since the first Mystery quilt Debra Hosler did for Pioneer Guild was so popular, she agreed to do a second.  I used fabrics mostly left over from my Scentimental Florals collection. (Two quilts from that collection and still more fabric to go!)

A closeup showing what the blocks look like - if there was enough contrast between the block & the background you might actually see them. 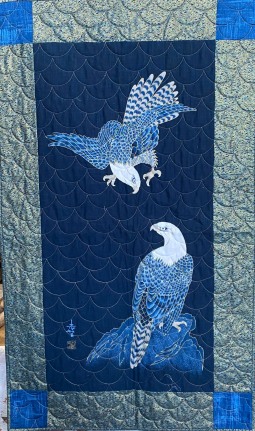 I actually made this panel with the intent to give it to Michele Egusa as a thank-you for helping me pick out colors to paint the interior rooms of our house.  The quilt was done for a long time but I was afraid to quilt it until 2020.  By then I’d lost track of her.  I sent her a friend request on Facebook but she apparently declined it.

In 2020 I made only one quilt from start to finish - the Diamond Jelly Roll.  But I finished and/or quilted many more that had been in my closet waiting for years to be quilted.  Here they are: 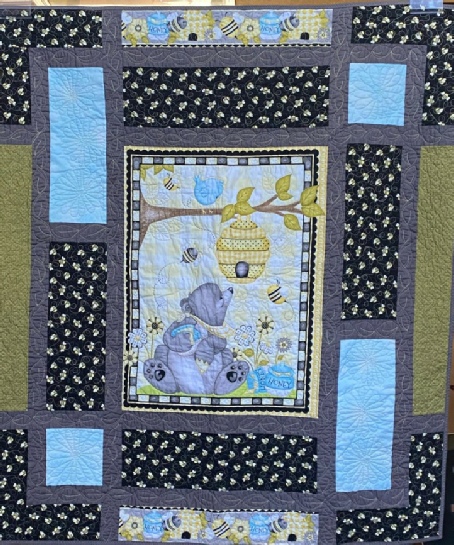 Shellie Fisher and I found the center panel at Sew and So in Marysville on the way to camp and bought the accompanying fabrics to make the “Prairie View” pattern.  I cut them both out for us and finished my top the same day - it’s a pretty easy pattern.  Then it waited for several years for a pandemic to get quilted. 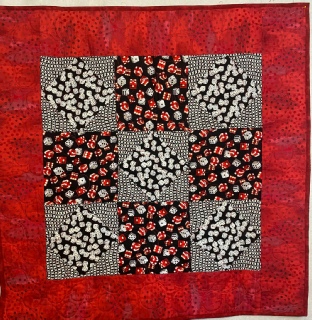 I got a big donation from a quilter who had passed away and among it were these blocks already made.  I put them together, added a border, quilted it, and donated it to community service.

Cynthia Miller made these houses several years ago and gave them to me - I don’t remember why.  She might have made a whole bunch.  I finally put them together and quilted them. 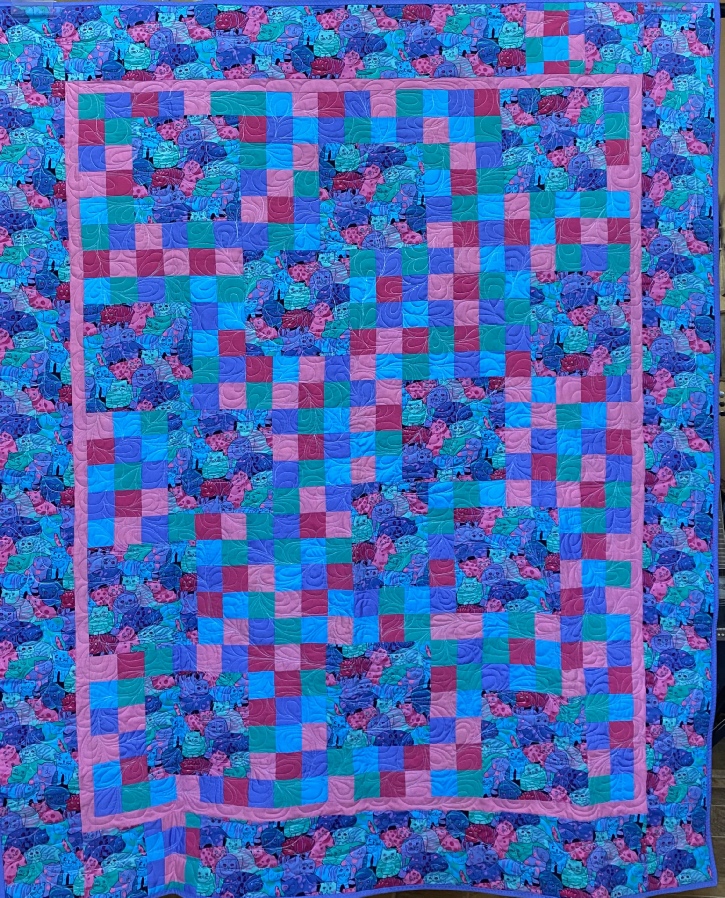 One year at a Pioneer GUBA sale I considered buying these fabrics from Debra Hosler but decided against it.  When the sale was over she gave them to me, apparently because nobody else had shown any interest and she wanted to get rid of them.  I made the picture big because unless you’re close up you can’t tell the print is of cats.  There really is very little contrast and it just looks colorful.  I donated it to Community Service and I’m sure somebody will love it. 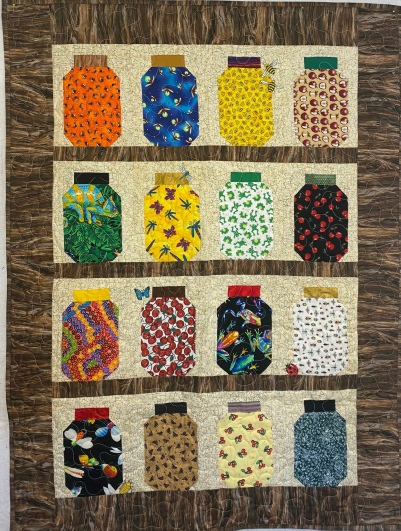 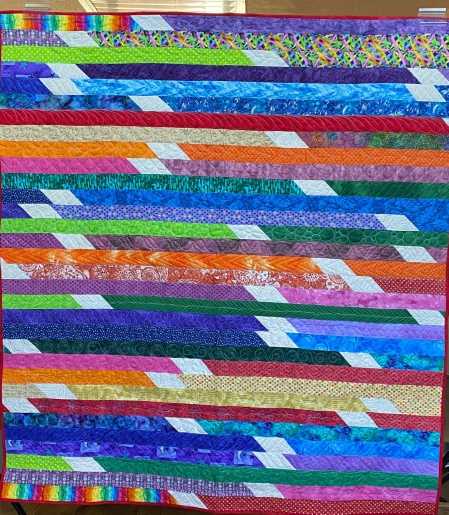 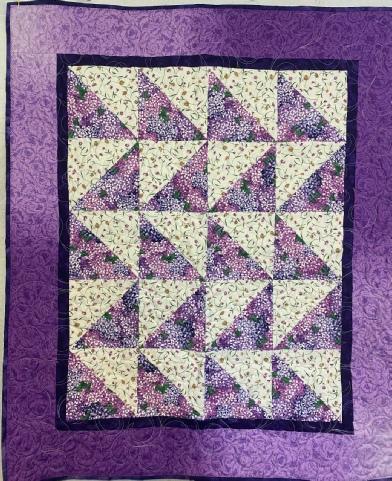 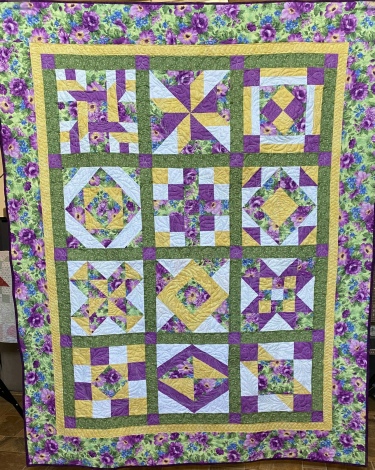 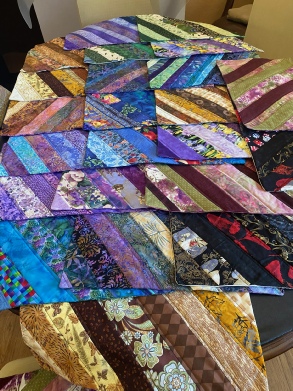 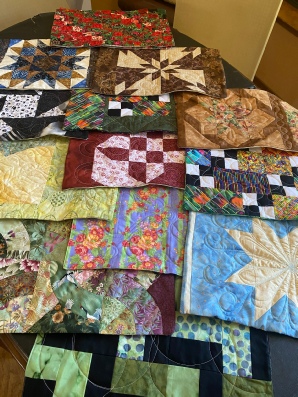 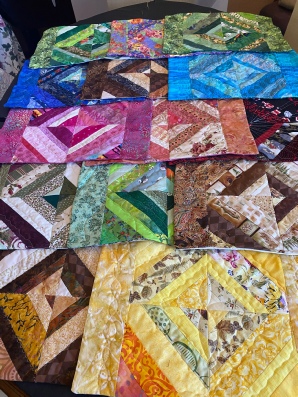 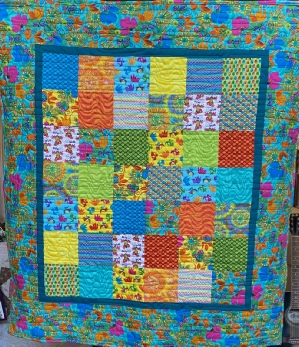 Many years ago I won some Jar blocks in a Block of the Month exchange (someone wins all the blocks).  I took off the bottom backgrounds so I could put them on a shelf and probably filled in with a couple extras - although I can’t remember which jars I made and which others I won.  I donated the finished quilt to Foothill’s Community Service.

During the Pandemic, Pioneer Guild gave out jelly rolls to make Jelly Roll quilts.  I didn’t go get one so I used strips from my collection instead.  I inserted diamonds to add interest.  Unfortunately, I didn’t check to see that the strips were all the same length.  I experimented with quilting something different on each strip and saved pictures as samples.  That part was fun!

The hydrangea blocks were part of a big donation I got from a guy who lives nearby, when his wife died.  The blocks were all made and I just put them together and added borders.  The outer border was a pretty ombre.   I donated the finished quilt to Community Service.

Shellie and I did this Block of the Month several years ago but I just put it together and quilted it during the Pandemic. It was the last of the “classic” quilt store Blocks of the Month:  pay for the first block and when you bring it back the next month you get the next pattern and fabric for free.  A lot more yellow than I typically use.

For a while, Gary kept coming up with people he wanted baby quilts for, so I finally bought some fabrics to make some and have on hand.  This was a charm pack plus borders.  It has a lot of fish and underwater creatures in it.  Nice and bright.

With the Pandemic came the advent of Zoom and Zoom classes.  Foothills embraced the technology and held both Discovery Days and speaker classes via Zoom.  One Discovery Day was Peggie Wormington’s folded stars.  We made 3 kinds.  The middle one needs better contrast to see the star.  They were fun once you caught on.  I made a bunch of the ones on the right and put them on Christmas packages for female friends and relatives.

Placemats for Meals on Wheels and Retirement homes

One of the first projects I finished during the Pandemic was the 55 placemats I’d started.  Shellie helped by quilting about 20 of them for me, which helped a lot.  Turns out I like to make the tops but I don’t like to finish and quilt them.  Who knew?

Pioneer Guild collects and distributes placemats.  In the past, they mostly went to Meals on Wheels, but during the Pandemic residents of retirement homes had to “shelter in place” - meaning they couldn’t eat in their communal dining rooms - and colorful placemats added a little cheer to a lonely meal.