Guild Challenge:  I Can Do It In Less Than One Yard

Linda Lambrecht’s “Hanging in There”

Nobody can make you feel inferior without your permission.                ~Eleanor Roosevelt 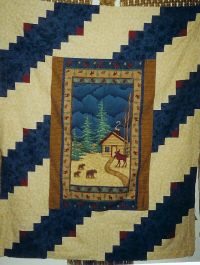 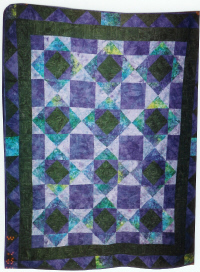 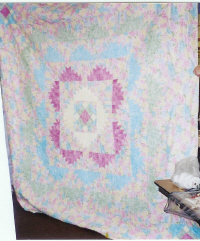 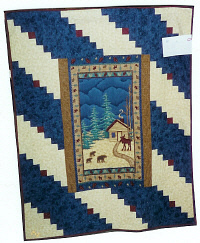 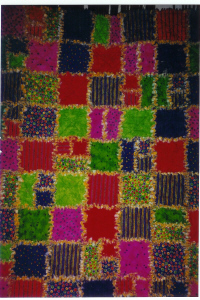 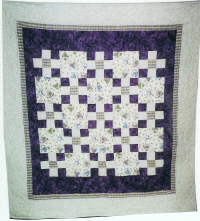 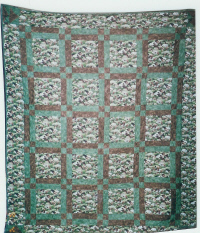 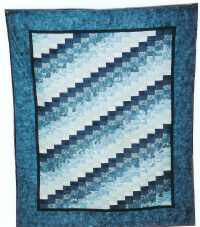 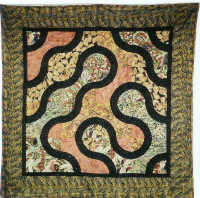 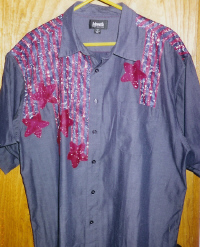 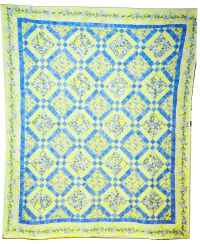 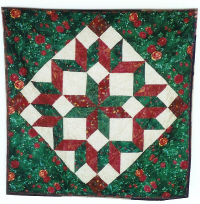 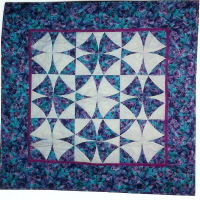 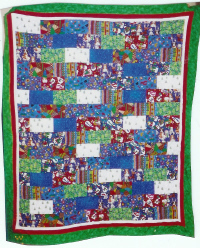 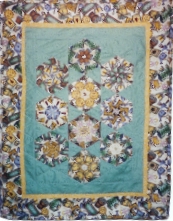 I Can Do it in Less Than 1 Yard

This was the second entry I did in Foothill’s challenge for the 2002 quilt show.  I decided to do a Stack n Whack with the challenge fabric - less than a yard of it.  I donated this to the Sutter Breast Cancer quilt auction.

This was a Jamboree class with Nancy Elliot McDonald. Fran Claassens and I took the class together; I made 9 blocks and she made one (partly because she talked a lot instead of sewing). This was the class where Nancy told her she was “spatially challenged,” which is true.  We still laugh about it.

Fran Claassens and I took this class from Judy Sisneros and shared our Asian fabrics to make our quilts.

I made this quilt for a friend in Western's Golden office, Linda Lambrecht.  She picked out all the fabrics, which were yellow with fairies (just like the pink ones I made Courtney's quilt out of).  I called it “Hanging in There” because she was having a tough time at work.  67x81

This is a fringed flannel quilt made out of fabrics that are much brighter than show in the picture.  I made it for Darren and Kristen Buck’s baby shower.

I bought this kit because I really liked the Maywood fabrics, especially the large roses.  Although it's supposedly a Christmas quilt, the fabrics aren't traditional.  I liked it so much I bought 3 more kits, planning to use them plus their leftovers to make a large quilt with 4 blocks.  If I ever get around to it, I might have to get creative with the center in order to have enough roses!

Every Cabin Needs a Flannel Quilt

I found the center panel and coordinating fabrics at Stitching Station and fell in love with them.  I didn’t like the suggested pattern so I made my own design with log cabin blocks.  Since I didn’t have a pattern I bought lots of extra fabrics.  I gave this quilt to my friend, Ann Millican.

Every Cabin Needs a Flannel Quilt #2

After making Ann’s quilt I had so much fabric left over I bought another panel and made another quilt.  I donated this one to the Sutter Breast Cancer quilt auction.  It sold for $400.  Two other people (that I know about) copied my design.

Bargellos are one of my favorite quilts.  I found a sweet treat with the French blue fabrics  that go in my sister Sheila’s house so I made this bargello quilt for her.

I made this quilt for a friend of Gary’s, Fred Besana Sr.  He was a hunter so Gary thought he would like it.  In retrospect,
I think it’s kind of boring.

I made this quilt while on vacation at David Walley’s resort.  The 9” flannel squares alternate with  9-patches.  I made it for Brian McDowell as a thank-you for them letting us use their cabin.

Made for Sheila - she bought the fabric for Christmas quilts for both of us.  Got hers done but mine is still in pieces.

Took this class at Stitching Station.  I made it for Gary’s mom, RoseMarie Voet, as a bedspread for her bed.  When she passed away Brian took it for a LAN quilt…which surprised me.  He said it would go to the last one to decide to stay.

Everyone was making aprons so I decided I would make one too.  I made it for Ann Millican for Christmas, from Fran’s pattern.  It has Christmas fabric on one side, fall leaves on the other.

One day we were planning our Quilt Rush trip and I realized I had never made a batik quilt.  So I bought batiks while on Quilt Rush 2002, and used a pattern from Stitching Station that was a door prize.  I made this at David Walley’s resort in Genoa NV in June 2002, and donated it to the Roseville Rotary’s silent auction (Bruce Scheidt’s organization) where it sold for $150.

A Shirt for Dad

Dad loves unusual shirts -and red - so I made this shirt for him for Christmas. Actually I bought the shirt and made the yoke and front designs. 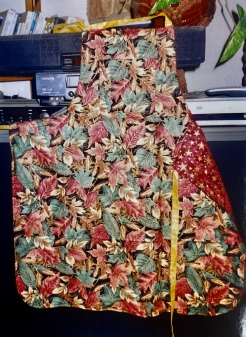 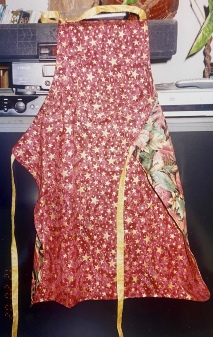