Not Your Grandma’s Dresden Plate 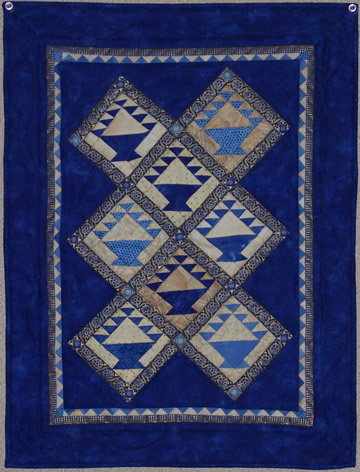 This is actually a miniature quilt.

I made one of these basket blocks in a precision piecing class taught by Sally Collins. It took all day to make ONE block. So I thought more blocks would surely be faster than that! I couldn't reproduce the block - strange measurements - so I drafted it in EQ6 and paper-pieced the blocks. Most of them I did while mom was working on her embroidery. But eight of them was plenty! And enough. Then I added the pieced border, and one of them was enough.

This quilt was a hit at the Roseville Quilt Show (where members recognize the work that went into it) but not so much at the Pioneer Quilters show.

In 2009 the Roseville guild used it to make one of their note cards for sale with the Opportunity Quilt. 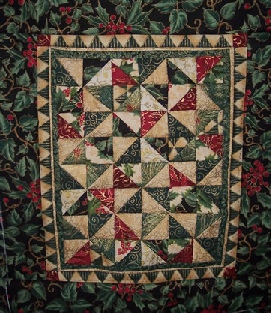 This is also a miniature quilt.

I was cleaning out my fabric scraps and found I had made a bunch of half square triangles from the leftovers of my "Christmas Ribbons" quilt. I didn't remember making them, but there they were! So all I could do was to make more, then put them together into a quilt. My bridge partner, Brence Davis, said, "Oh, can I have it?" so I gave it to her for Christmas. Be careful what you ask for! 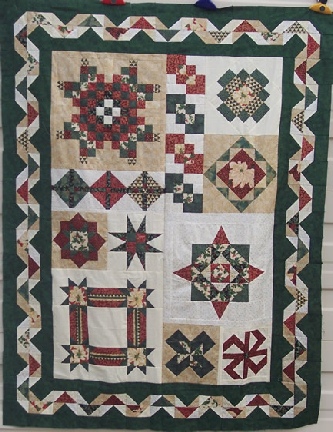 Our mini-group, the Ladies’ Underground Dinner and Quilting Society, decided to make the Atkinson pattern, “Lessons from Mama” as a group.  The requirement was that you use only your stash.  About 6 of us then entered them in Foothills’ quilt show the next year, all hung together.

It was amazing how different they all turned out.  Fabrics ranged from clear Christmas (mine), to folk-art Christmas, 30’s, Civil War, “uglies”, and blue and yellow.  People loved seeing them together at the show. 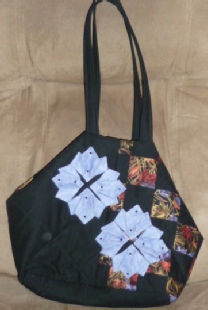 I made this purse in a class given by Rami Kim for Roseville Quilters Guild. I really liked the fabrics; I modified the flowers (somehow I simplified them, I think by turning them over); and I hated the purse pattern. It was really weird - it opens sideways so it's totally counter-intuitive. And no pockets inside, bummer.

After hanging around the house for a while I finally put it into Roseville Quilters' 2009 quilt show at the Placer County Fair. I've always said, if you want to win a ribbon, enter a "wearable" in the show. It won 2nd place.

I finally sold it in Pioneer’s boutique. 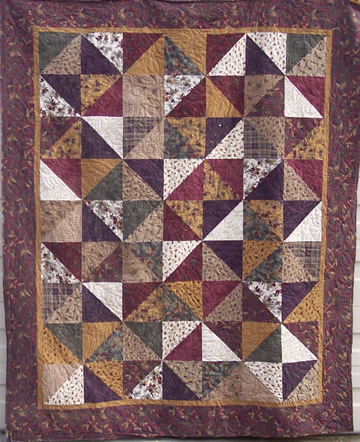 I bought this flannel quilt as a kit on the way to camp one year, and put it together at that camp.  Then it hung around for a couple of years (as do many others), waiting to be quilted.

One of my friends from my Bunko group, Nancy Winton, came “shopping” in my closet and absolutely loved it.  So I quilted it, put it in a quilt show, and sold it to her.  It fits perfectly in her living room and has a wonderful  new home. 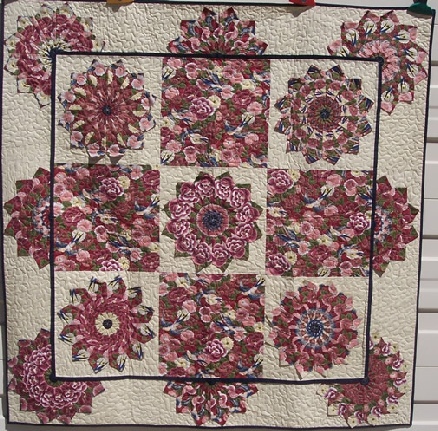 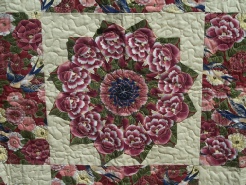 Not Your Grandma’s Dresden Plate

I took a “stack and whack” Dresden plate class as a Discovery Day with Foothills Guild, taught by Shari Bahr.  She had a really neat way of holding the fabric layers together with carpet thread rather than pins.  I thought it turned out really well.

I donated it to the Sutter Breast Cancer quilt auction.

Close-up of the center Dresden plate. 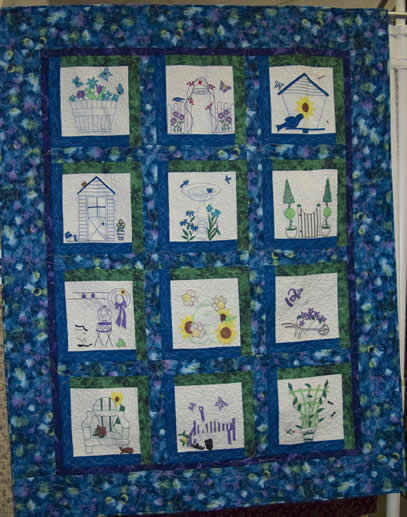 This is the second one with the same panel that mom embroidered and painted for me. It was probably the last project she was able to do where she could still pick colors and stay within the lines.

In 2011 I entered it in Foothills’ quilt show.  They categorized it as an Art Quilt (probably because of the fabric paint) and it won a 2nd place Viewers’ Choice ribbon. 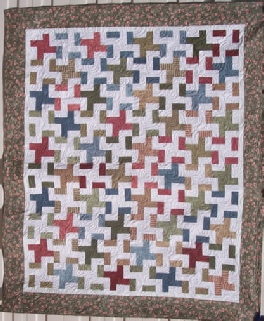 This quilt was done as a Strip Club project at Stitching Station.   It’s a tessellation.  I didn’t really like it, so I donated it to the Sutter Breast Cancer Quilt Auction in 2008.  I thought that way it would find a home with somebody who did like it. 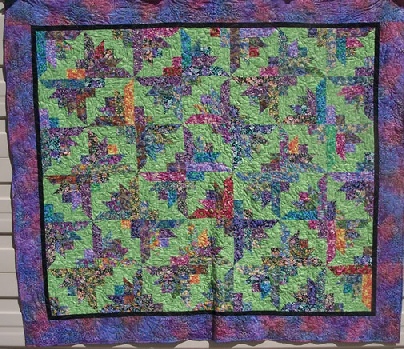 For a while, Betty Kisbey and I had an arrangement whereby she gave me blocks she made but didn’t like and I turned them into a Community Service quilt.  That’s what this one was.  I put the blocks together, found a border, quilted it, and donated it to the Sutter Breast Cancer Quilt Auction in both our names.

It was a Strip Club project from the Cottage Oaks quilt shop in Granite Bay.  I still have the same kit but as of 2016 haven’t started it. The green background was Betty’s choice; I think mine might be black.

A smile is a curve that sets everything straight.        ~Phyllis Diller 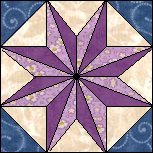 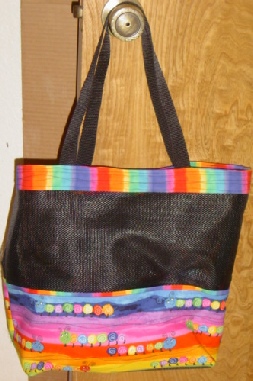 I made this mesh screen purse in a Discovery Day class, using my favorite cute caterpillars fabric.  I gave it away but I can’t remember who I gave it to.

Shellie Fisher and I both bought the flannel center panel and companion fabrics and I made kits for both of us.  I put it together at Eagle Lake in 2007.  Finally quilted it in 2008. 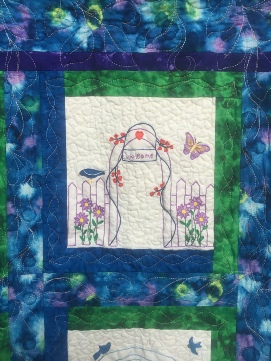 Close-up of one of mom’s embroidered blocks.