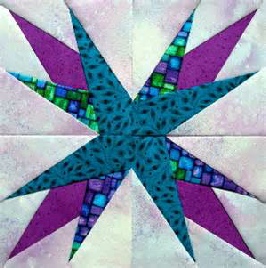 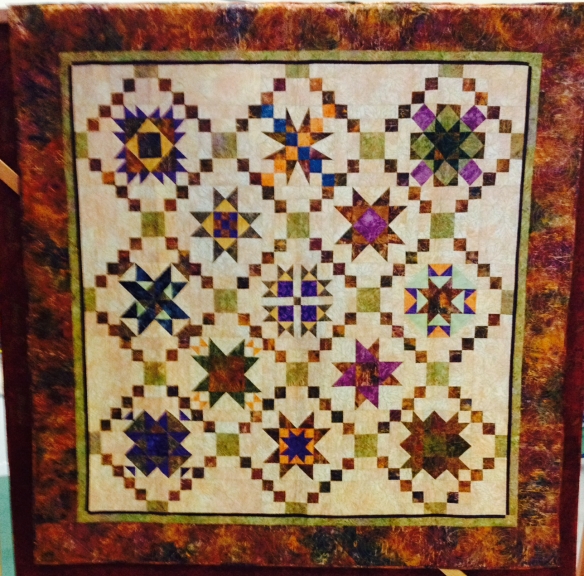 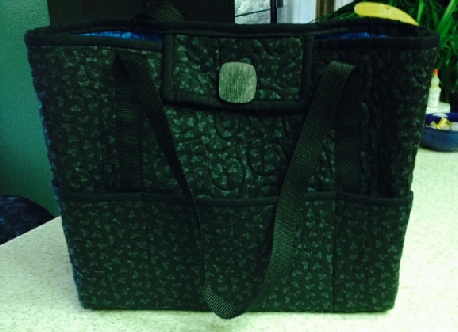 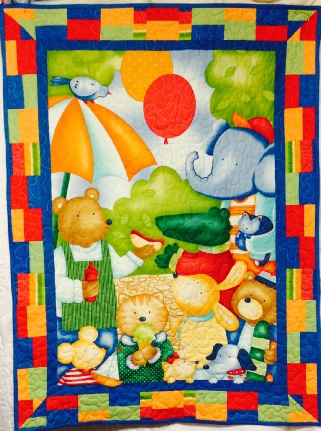 30s Block of the Month

I found this kit at Meissner’s in Rocklin when Shellie and I were there for a Block of the Month Saturday.  I didn’t read the directions very well for the border but decided it didn’t matter.  I gave this away, but I can’t remember who I gave it to.

This is the third time I made this purse, and although I like the result, it’s a real pain getting there. This is the second one I made for myself, plus one for Shellie for Christmas one year. I had some issues with the pattern (making it bigger only to cut it down) and complained to the pattern designer but she said she did it on purpose.

The problem is, the purse is so big, everything fits in it, so I put everything in it and then it’s so heavy, I don’t want to take it anywhere. So I like it but don’t want to make it again.  Ever.

This was a Block of the Month from Cabin Fever (from several years ago), although I changed the background from what I thought was a really boring plain batik to a really pretty one with gold leaves.  I was quilting it when Gayle Garrett Ronconi was here visiting, and she loved it.  I put it in a couple of quilt shows and in 2016 I gave it to Gayle.

I found this kit at Shared Stitches on the way back from camp at Zephyr Point.  Loved the fabrics.  I was going to make it for Brian but when he found Jessica, I decided to give it to her for Christmas in 2015 instead.  I think it’s a lot prettier in person than in the photo.

I started this quilt in a Discovery Day class taught by Pat Plotner, “Lone Star the Easy Way” - meaning it was made with half-square triangles instead of diamonds.  Didn't finish it, put it away somewhere and couldn't find it.  A few years later I was trying to consolidate some of my fabric (to make room for more) and there it was, in a box called “Red Hat.”  Some Red Hat fabrics were with it, including 4 small panels, and I actually had written a few design notes before putting it away.  Although they were pretty cryptic, I figured out what colors I had planned to put where, and that I wanted to use the 4 panels in the corners of the Lone Star.  Finally finished it in 2014, intending to donate it to the Breast Cancer Quilt Auction, but I didn't get it done in time.  So I put it in a quilt show or two then donated it to the 2017 Breast Cancer auction.

Debra Hosler created this fun Mystery quilt in lieu of a Block of the Month for Pioneer Guild.  I used some fabric I had for another UFO I didn’t want any more. It was a lot of fun - and we had lots of participants!  Mine is very bright.  In fact, because it is so bright, we used it several times outside the Pioneer quilt show to attract attention.

With a Little Help From My Friend

This was a Cabin Fever Block of the Month - I decided to get out of my box and make it in 30’s fabrics, which I don’t particularly like. When I got to putting it together of course I had no 30’s fabrics to use.  My friend Margie Cruz, with me at Pioneer’s quilt camp, gave me the purple and green fabrics so I could finish the quilt.  That’s all I needed - a little help from my friend.

I called this Christmas Convergence because the fabrics are all gold Christmas fabrics.  It made a nice table topper.

When mom was no longer able to pick colors for embroider work I asked her to make some basket patterns in redwork.  She thought it was odd for everything, especially leaves, to be red, but agreed.  I gave her a bunch of thread I had separated into two strands - but I underestimated how much she would need. When she ran out, she bought more but didn’t remember you only use 2 strands, and used all 6.  (I’m not sure how she managed to thread the needles.)  Interestingly, she hadn’t finished whole blocks, so all the blocks have thick and thin threads - it looks 3-dimensional and like it was done on purpose.

I put them together with blocks from a Cabin Fever Block of the Month and used the toile they provided for 4 of the blocks. 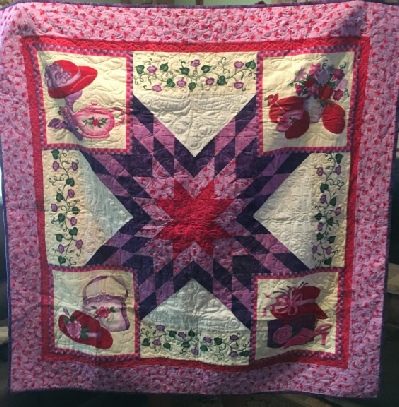 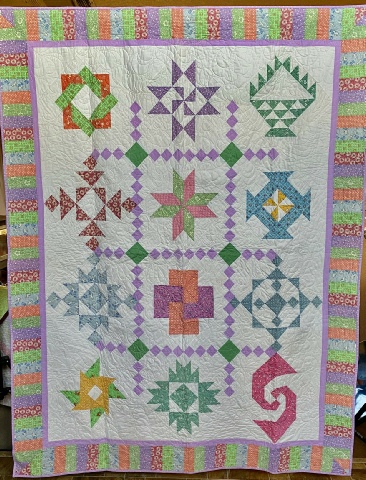 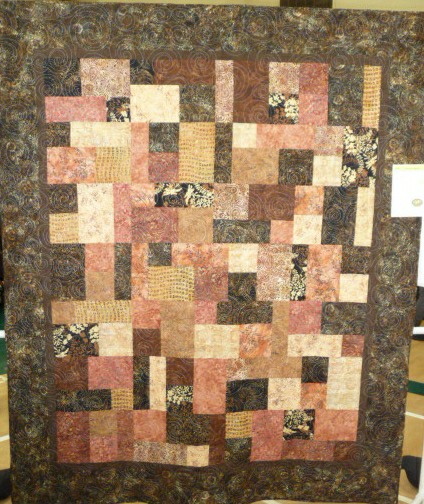 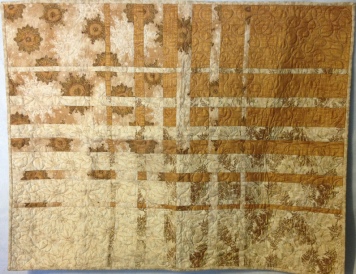 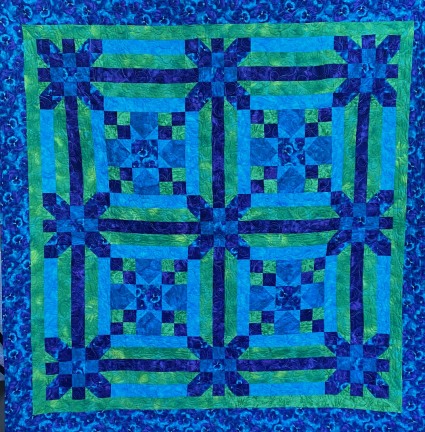 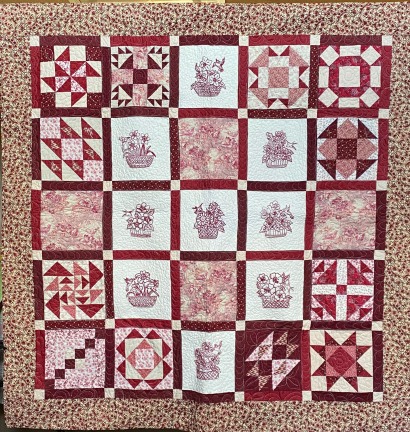