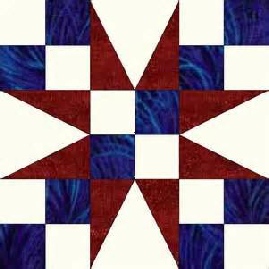 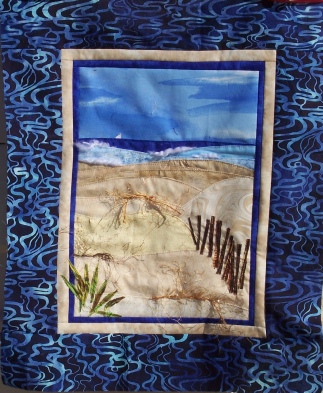 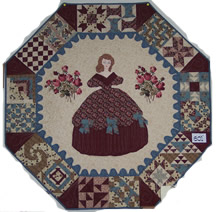 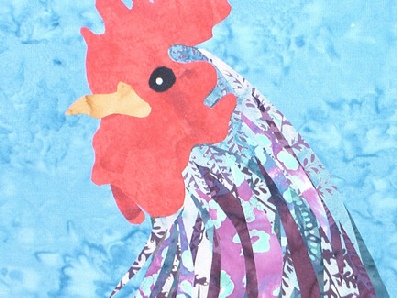 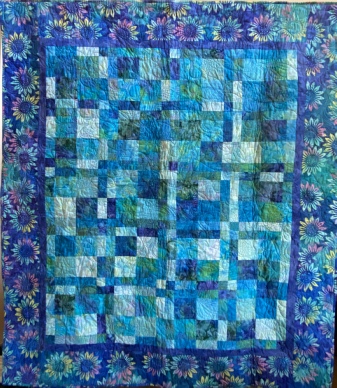 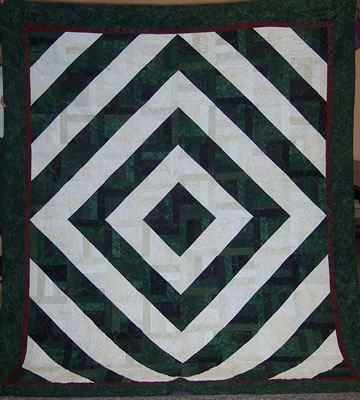 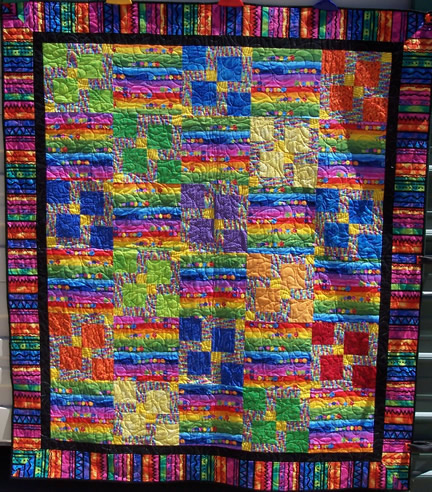 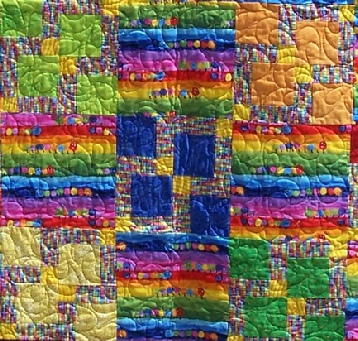 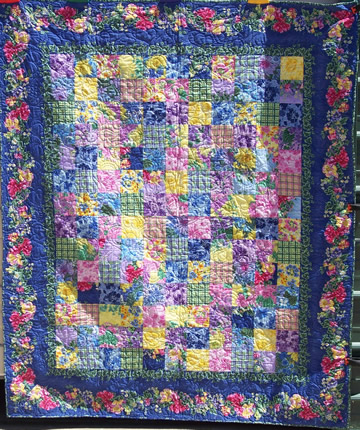 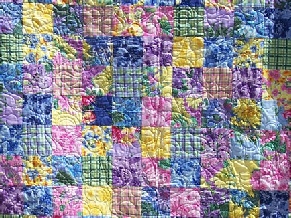 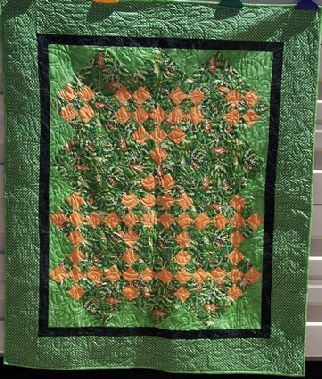 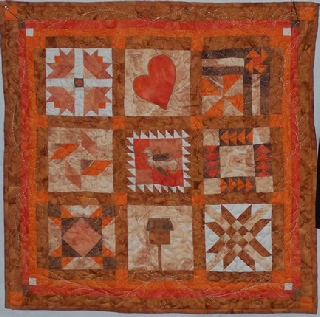 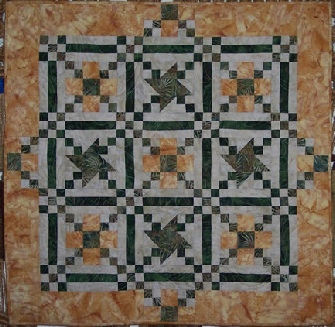 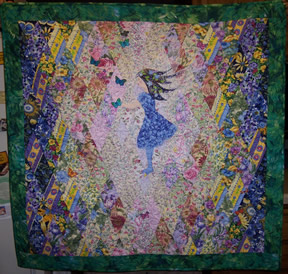 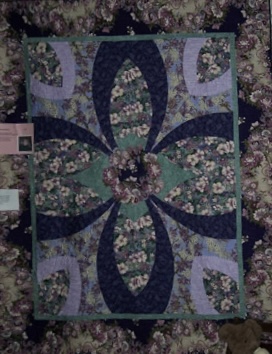 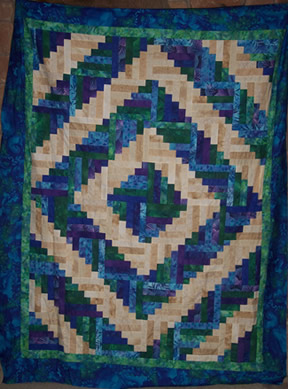 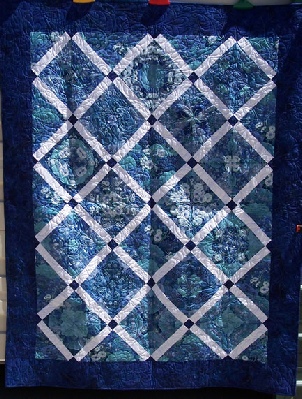 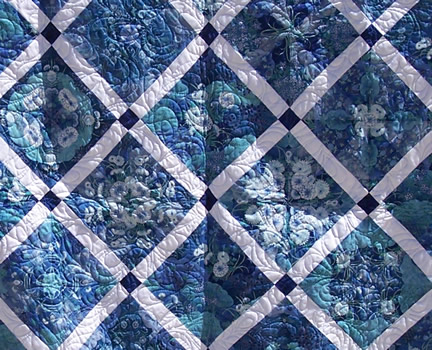 Made this at a Fall Fling class.  I entered it in a Pioneer Quilt Show and won first place Viewers’ Choice for mini quilts, and Members Choice for the same.

The Hens Are All Gone and the Rooster’s Blue

This was from a Jamboree class taught by Michelle Peerson.  I finished it to give to Barbara Christy when she left Western (after I retired).  I only have a picture in progress that Michelle took.  She uses it in class to show thinking out of the box (ie, a blue rooster).

When Brian moved into his own apartment in August 2005 he bought a new bed and needed a new quilt.  He wanted the same dark colors as before, and white not off-white or tan.  He edited the fabric selection.  These are log cabin blocks in the “barnraising” setting.  I made most of it at Pioneer’s quilt camp.  It’s 96x116, which was quite a challenge for my handiquilter frame.

This is the first fractured 9-patch where I made random 9-patches and arranged them differently from previous versions.  The fabrics were a Sweet Treat +1 and I found the border at Cabin Fever, which I thought was perfect.  I quilted it with “Garden Branching” - various leaves and flowers.

I made this quilt for Stitching Station’s first challenge.  Had to use 4 specific Civil War fabrics and add whatever else.  Many of the blocks are from Eleanor Burns’ “Underground Railroad” book. The flowers appliquéd on the background were my first attempt at Broderie Perse applique, having recently taken a class.  The dress was based on a Civil War gown I found on the Internet.

The quilt won first in Viewers’ Choice voting and a $150 gift certificate.

Challenge quilt for Foothill Quilters.  The challenge fabric was really ugly and I hated it.  The diamonds were a real pain.

Started the top in a class offered by Foothill Quilters, taught by Diane Leighton.  The pattern was called “Woodpile” by Anita Hallock.  I took many of the fabrics from my “beautiful blues” collection.  One of them is a “magical” fabric that almost glows.

I decided I should make one from Sandy’s fabrics if I were to continue to teach the class at Stitching Station.

I bought Halloween fabric the first year I started quilting.  The best thing about it was that it kept me from buying more!  At Quilt Camp I put it together, having run out of other things to do  So now I have a Halloween quilt I don’t like - but what am I going to do with it?

I bought this fabric at Pacific Internationa and waited for the perfect person to make a quilt for. Emma Coleman (Dannetta’s third child, and my goddaughter) didn’t have a quilt so I made one for her when I made one for her little brother Jackson.  I worked on it at the Appraiser Training Center while Marie Cleverdon had it, and we all loved the fabrics.

I made this for Dannetta’s fourth baby, Jackson Patrick Coleman.  I used my favorite smiling caterpillar fabric alternated with Fractured 9-Patch blocks.

These blocks were from Stitching Station’s first Buck-a-Block.  I made a couple more blocks and used it with my first redwork project in the center.

This was from a Discovery Day class taught by Beth Jacobson.  It was pretty cool - shaped like a 6-pointed star.  I don’t remember what I did with it!…gave it to someone who I thought would enjoy it,

The Asian Salsa class taught by Don Linn for Roseville Quilters is where the pattern for this quilt came from.

It was judged at the Foothills Quilt Show in 2007 and awarded a second place ribbon!  I gave it to Keiko Kagami-Chang for a fundraiser for her son’s charter school so unfortunately I don’t have a better picture.  The picture is a lot darker than the actual quilt was.

This ws a mystery class taught by Betty Kisbey at Jamboree.  It’s a Debbie Caffrey pattern. I bought the fabric in Portland after the Ricky Tims event that Shellie Fisher and I went to.

Made this in a Judy Sisneros class from her newest book, a “9-Patch Pizazz” pattern.  Made it for my great-nephew Lucas Peccianti.

This was a stack ‘n’ whack with a pretty Asian fabric.  Alternate blocks are of the basic fabric itself.  I brought it to the care home when my mom was there and gave it to her roommate (who really looked out for her) when mom passed away. 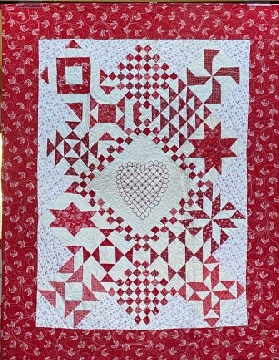 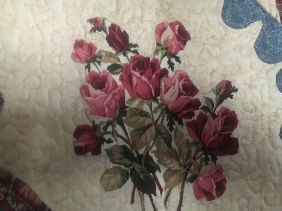 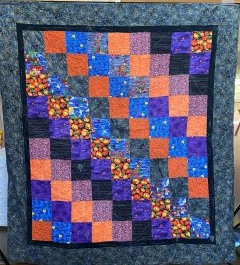 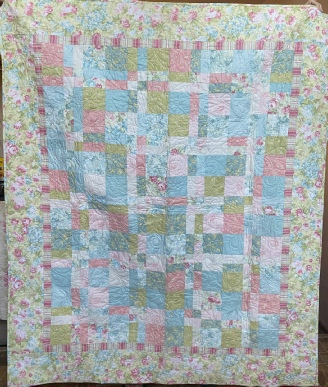 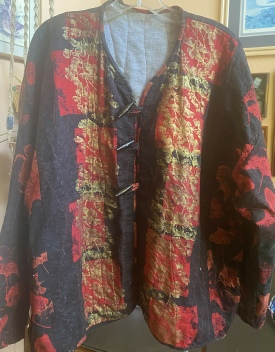 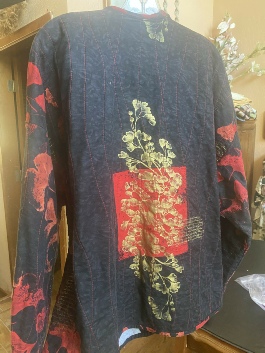 This is a sweatshirt jacket from a pattern by Colleen Granger.  It’s the second one I made; I learned from the first not to over-quilt it, because it gets too small.  It’s a bit boxy and doesn’t fit any more (too big).

One of several I made since I ended up teaching this pattern as a class for guilds.  I gave this one to an organization collecting quilts for survivors of Northern California fires in 2020. 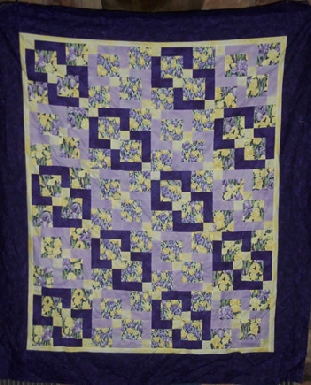