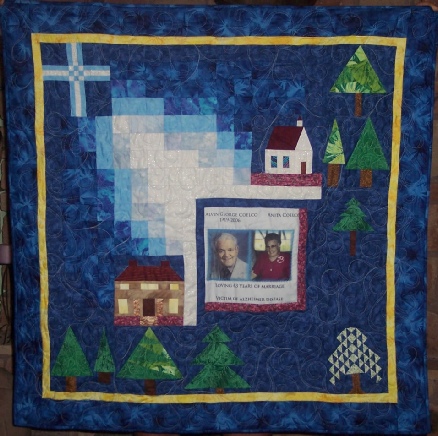 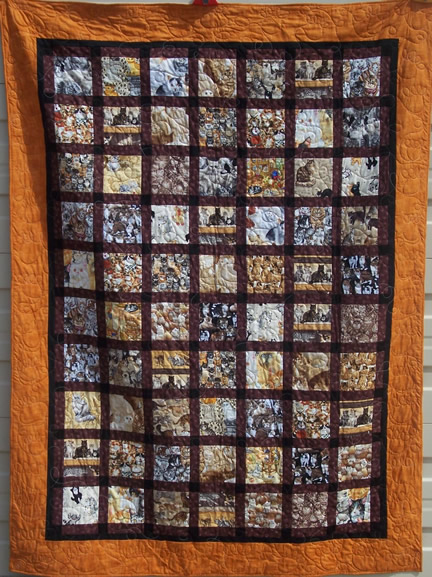 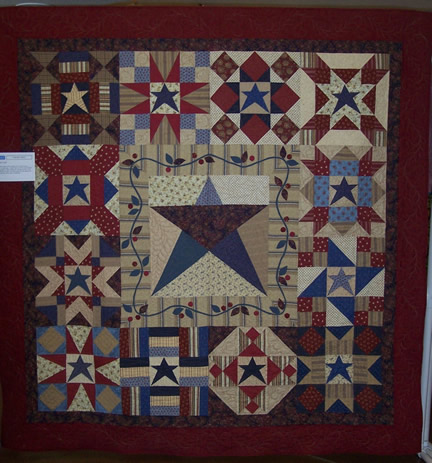 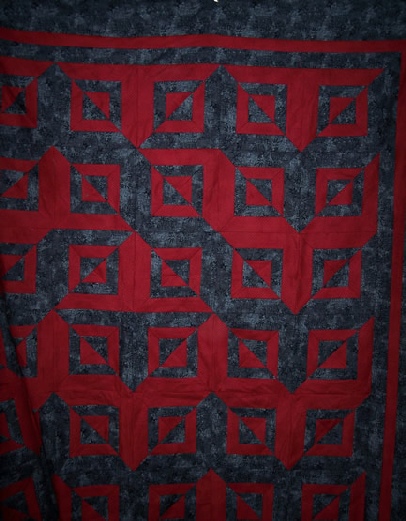 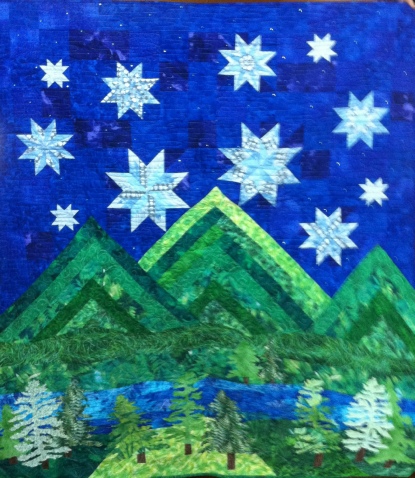 I made this quilt for Foothills’ challenge in 2007.  We were given a fat quarter of silver dot fabric that had to be used (it’s in several of the paper-pieced stars), along with the theme…although I can’t remember what the theme was. It won Second place Members’ Choiceplus aa $35 gift certificate.  The stars were paper-pieced, ground was curved piecing, trees were fusible applique.

After I decided I was tired of cat quilts, Janet Nickless asked me to make a cat quilt for her sister Janis.  She wanted it all in neutral colors.  I found a poppy batik for the back, since she also loved poppies.  70 charm-size blocks.

Cabin Fever’s Block of the Month for 2005 were 18” blocks from the book, “Women of Grace and Charm.” I changed some of the fabrics because I didn’t like chopped-up eagles, which made it brighter than the original.  We struggled with the paper-pieced stars in the centers of all the blocks.  Brenda Lopez made me a paper piecing pattern for the large central medallion and it was from  that - at last - that I figured out the secret to paper-piecing with odd angles.  Wish I’d figured it out a year sooner!  This turned out to be a really big quilt.  I gave it to Brian and his roommate Adam used it for a bedspread until he moved back home.

I started this quilt in a class through Roseville Quilters with Colleen Granger and finished it in May 2007 as a high school graduation present for my nephew David Scheidt.  Colleen calls this a Bodacious quilt - she has a really neat way of neting parts so they dome out really straight.  The borders got chopped off in the picture but apparently it’s the only one I have - before it was quilted.  :-(

When I was editing the newsletter for Foothills Guild I learned that people were asking for quilters to make quilts dedicated to people who had Alzheimer’s.  I think the idea was that each 4’ quilt would be put together into one large one and travel around the country.  I was given the name and information about Al Cohelo, plus pictures of him and his wife, and made this quilt based on that information (church, home, family, builder, outdoors, loved blue).  I sent it to his wife when it was done but she was very touched and  I suspect she kept it rather than sending it on. 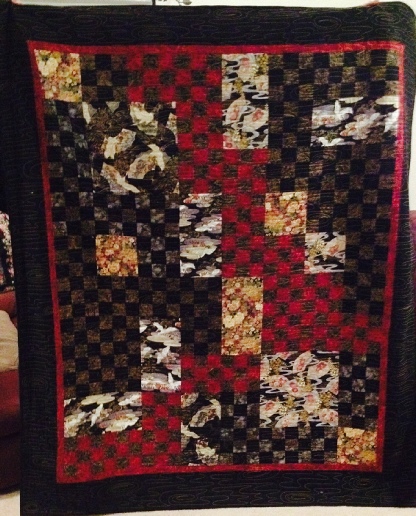 Sheryl Bane commissioned me to make a quilt for her husband for Christmas.  I used a couple of focus fabrics she picked from my stash, and several coordinating fabrics for 9-patches.  I quilted it with “water.” 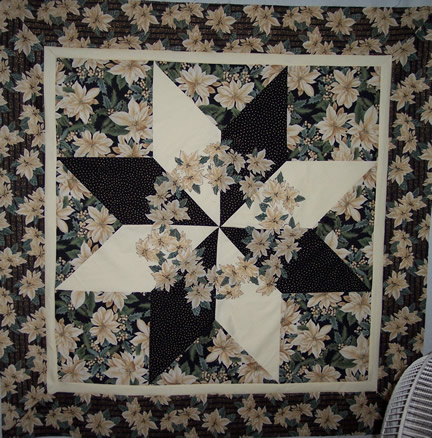 I made a Towne Purse in a Discovery Day class taught by Holly Dolkas.  I made it for Cheri Andrews as a Thank You for helping me during my FQG presidency.

Then I made one for Shellie Fisher as a thank you for all her help during my FQG presidency in 2006-2007, and one for my sister Sheila Greathead for her birthday.  I know Shellie used hers.

This was some of the first fabric I bought when I started quilting.  I made it with a  wonderful diamond ruler from Jan Krentz.  I love the white poinsettias - I believe they were a Hoffman fabric with gold.  The black is actually Sugar Dots black with gold dots.  The quilting was a challenge, especially when I discovered an un-noticed tension problem!  The quilting was mostly criticized by the judges.

I made this as a shop sample for Stitching Station, with the intention of giving it to Duffy when the store was done with it.  I gave it to Duffy’s family.  Here’s my story about Duffy. 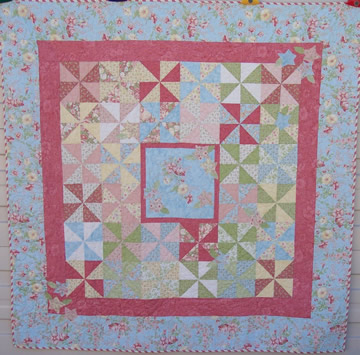