Plus a couple of extras... 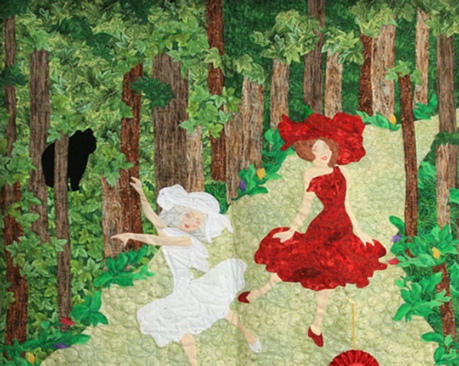 My job for the 2009 quilt show for Foothill Quilters Guild was the Challenge. The theme of the quilt show was "Once Upon a Time." I had people pick a Dove Dark Chocolate from a bag; inside each was a promise, and they were to use the promise to pick a fairy tale, then base their quilt on the fairy tale. I picked "Buy Yourself Flowers" and used the fairy tale "Snow White and Rose Red" because the girls were "as fair as flowers that grew outside their cottage." I based the girls on a couple of Flower Fairy patterns, but enlarged them and turned them both into rose-type flowers. I used both fusible and needle-turn applique for the picture,

and thought the background turned out pretty good considering it was my 3rd start and was 4 fat quarters sewn together. There are hot-fix crystals on both dresses.

This quilt was judged, and the judges gave it a 2nd place ribbon.

Trish Whitehill, one of my Bunko friends, loved the quilt and bought it from me.  I later found it on somebody’s website where she had a lot of “Snow White” things. 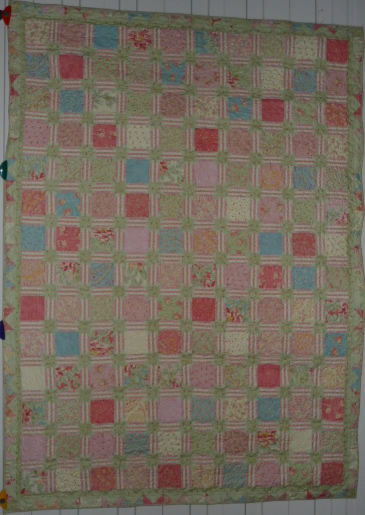 This was a charm class Pam Sealy taught at Stitching Station. However, it turns out that for some reason, I bought SIX charm packs, not just one or two. So my charms quilt turned out to be a giant. It has pink and yellow striped sashing with green stars in the corner stones and flying geese in the border. Pam re-designed the original pattern to not have partial stars in the edges.

I quilted it with different flowers in each of the charm squares. Way too much work. The pictures to the right show both the sashing, corner stones, and quilting.

I sold it at Pioneer’s quilt show quilt sale. The person who bought it was another Pioneer member who absolutely loves it.  Success! 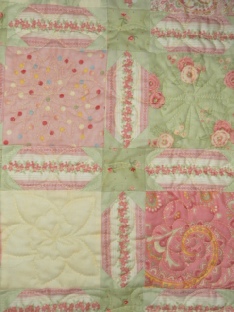 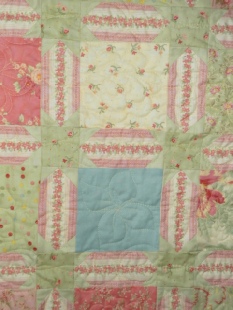 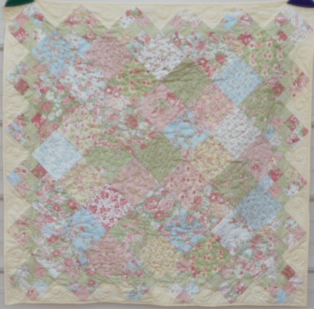 Pam Sealy taught a series of classes at Stitching Station using charm packs. I took this class and made a table topper. Unfortunately, the colors were too similar for the design to show. There is a row of small green squares on point that surround the whole inside. The outer setting triangles are a pale yellow.   This is a much better use for a charm pack! 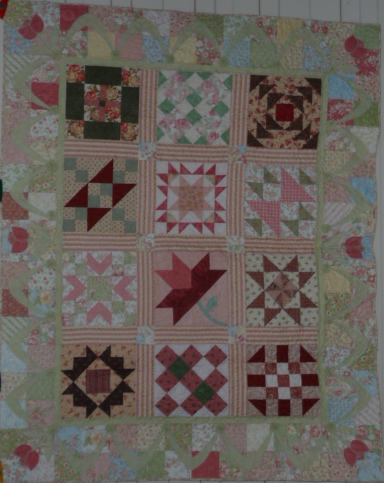 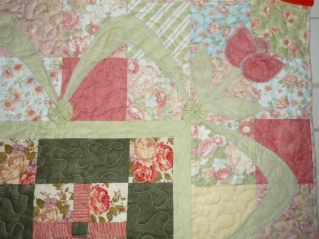 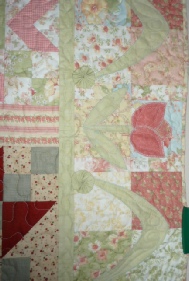 This was from Pincushion's Block of the Month from probably 2006 or 2007. The only thing the fabrics had in common was that they were all Modas. I decided to use only things I had on hand to finish it - fortunately, I had a bunch of charm squares for the border, and stripes and green left over from the Giant Charms quilt. I used my new Clover yo-yo maker tool to make yo-yos for the bases of the arcs.

I quilted the blocks with plain meandering and the sashing with curls. I thought it turned out pretty good.

Border detail of Pincushion Modas.  I machine-appliquéd the flowers and arcs in the borders. 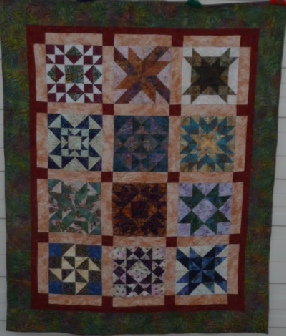 I originally bought a beautiful dark blue batik for the cornerstones and inner border but decided I needed to use it for another project. So I got the dark red instead (same as Shellie bought). I quilted it with an overall pattern. 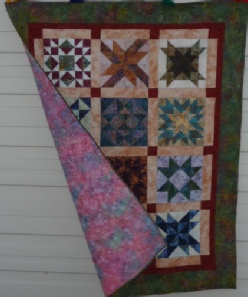 The back is a pretty batik.  The wind helped show  it off. 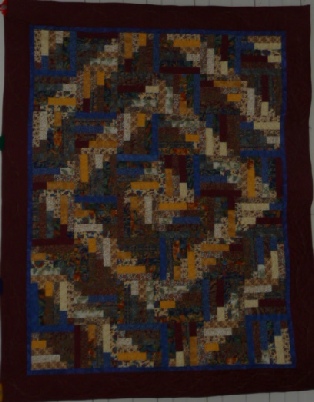 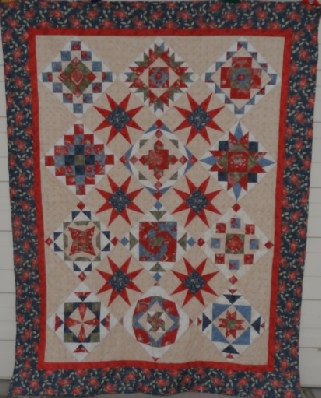 This was a Patchwork Party internet block of the month (kind of) where you get one block from each of 12 different quilt stores. They also want you to buy their finishing kit, of course. I designed my own finishing kit in EQ6 and got all the fabrics for it plus the back for less than the finishing kits were selling for.

The blocks used Marti Michell's templates, which I hate using, although they made it really easy  to match corners and make points.

I donated this quilt to the 2011 Sutter Breast Cancer Quilt Auction. They had it n the on-line auction.

This is the second Woodpile quilt I made, the second time I took the same class from Diane Leighton. The first was my "Beautiful Blues;" this one I made entirely from the fat quarters I got every month from Keepsake Quilting's Hoffman Medley of the Month. I looked just for darks and lights, with a wide variety of fabrics.

I think the "barn raising" design is more apparent in the picture than it is in real life.

This is the quilt that was made for my by Foothill Quilters Guild members when I was President. It was planned and coordinated by Shellie Fisher, who also re-made erroneous blocks and sewed all the blocks together. Since it was so big (94" square) it wouldn't fit on my frame and I was still trying to figure out how to get it quilted when Fran Claassens offered to quilt it for me for my birthday. She quilted it with roses, which turned out really nice.

In 2009, once I got some major projects under control, I went through everything I had and organized and indexed all my Unfinished Projects (UFOs). I was amazed to discover I had 72 ( ! ) of them, mostly from classes I took but never finished. This doesn't count the Hussies (HSY=haven't started yet), of which I have many, many more... some kits, some fabric collections, some just "plans and ideas."

I decided to make it my goal in 2009 to finish a significant number of UFOs.

In July I finished six quilts: 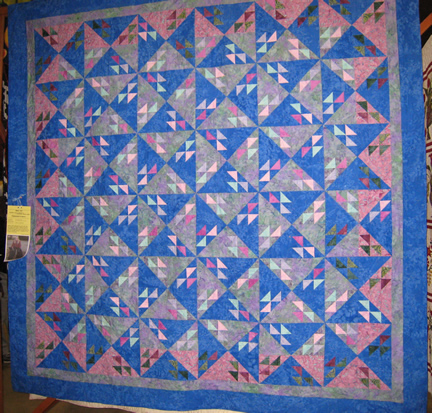 I actually bought this quilt top from Sandy at Stitching Station when she clearanced things out. I have no idea why I bought it, maybe to practice quilting. Anyway, I donated it to Roseville Quilters Guild for A Bit of Me - I thought that would be a good way to raise money for the guild.

Inside me lives a skinny woman crying to get out. But I can usually shut  her up with cookies.

In 2008 I volunteered to head up construction of Foothill’s 2009 Opportunity Quilt, using an Anelie Belden Dresden pattern.   Betty Kisbey owned her Quilter’s Stash quilt shop at the time, and helped us pick out the fabrics.  It’s all batiks; the brown and tan look like suede.  The hardest part was getting a good picture.  I tried on 3 different occasions, without success.  It was won by one of our members, who absolutely loved it. 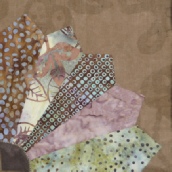 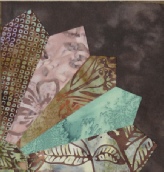 These two close-ups were taken by a professional photographer to use on the postcard.  They show good pictures of the blocks and fabrics.